The M15 pre-release weekend is not to far away and new core set cards are being spoiled daily. So far the set has had a lot of good cards spoiled but one card has particularly caught my eye.

Chief Engineer is a 1/3 for a (1)(U) with a very powerful ability, it gives all my artifact spells convoke! This guy is going to make some waves somewhere, and I’m sure it will be in a very broken way. Abilities that lower the costs of cards are always good, and people will try to play them any way that they can. The only card that I can think of that has a similar cost reducing effect is Mycosynth Golem, and that gentleman is insane as well.

702.49a Convoke is a static ability that functions while the spell with convoke is on the stack. Convoke means, “As an additional cost to cast this spell, you may tap any number of untapped creatures you control. Each creature tapped this way reduces the cost to cast this spell by {1} or by one mana of any of that creature‘s colors.” Using the convoke ability follows the rules for paying additional costs in rules 601.2b (line 3) and 601.2e–g.

So why is this useful?

Convoke as a mechanic is used to allow players to play bigger spells much faster. Many of these spells, especially rares with convoke, have big effects such as Chord of Calling and Angel of Salvation. Chief engineer works in the same way, but for all of your artifact spells. But what does that mean necessarily? Chief Engineer is an enabler for artifact decks everywhere, essentially lowering the curve of your deck, without reducing it’s power.

I’ll explain. Let’s assume you are playing Affinity in Modern. Affinity is undoubtedly the “fastest” deck in the format, playing multiple

cost Artifact spells on their first turn, and typically topping out their curve at three mana. The deck plays this way, opting out of playing higher costing spells, for the sake of speed. It also doesn’t help that the average Affinity deck only runs around 16 or 17 lands.  However, with Chief Engineer, those low costing Artifact Creatures like Memnite, Ornithopter, and Signal Pest all become mana sources.

[magic]Chief Engineer[/magic] also gives you some wiggle room, allowing you to toss the occasional high cost artifact spell into your lists, such as: 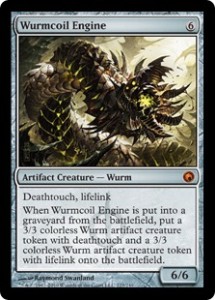 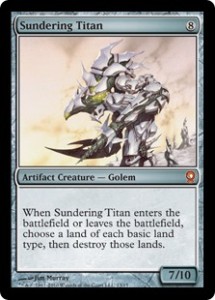 These creatures would normally be way above the mana curve for Affinity but now are a theoretical possibility because of [magic]Chief Engineer[/magic] (Wurmcoil Engine is especially possible T3 with the Chief in play).

My fellow writer and I have come up with a fun Modern deck idea for the Chief and we would like you to try it out!

The deck has the possibility of putting a Wurmcoil Engine out on TURN 2!

Please check out the deck and leave your comments below.