[magic]Altar’s Reap[/magic] will see its third printing in Conspiracy. This card is one of my co-writers favorite cards and has been reviewed in a previous article. Check it out for more details.

[magic]Assassinate[/magic] is a popular card for reprinting with Conspiracy included this will be its sixth printing. This card is nice but I feel there are better options for the card drop. I won’t be adding this to my binder. 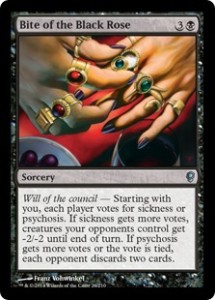 [magic]Bite of the Black Rose[/magic] is a new card from conspiracy and I can see this being EDH playable in certain types of decks. I would say if you are going to go after them chase the foils. This can fit nicely into a [magic]Nath of the Gilt-Leaf[/magic] deck. 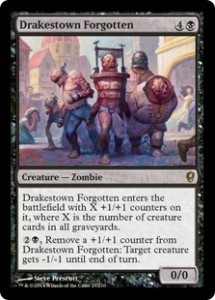 [magic]Drakestown Forgotten[/magic] this is another new card from Conspiracy and this has EDH potential. I can see this easily fitting into a graveyard or mill deck as its first ability will probably be more relevant than its second. Pick them up! 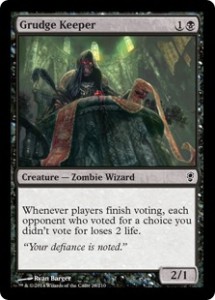 [magic]Grudge Keeper[/magic] is a very circumstantial card and it doesn’t stand well on its own. This card really isn’t EDH playable. Maybe if the Will of the Council mechanic spreads further than Conspiracy will this become a thing.

[magic]Ill-Gotten Gains[/magic] a reprint from Urza’s Saga. This card has plenty of EDH potential and only gets better when paired with the right cards. Cards like [magic]Leyline of the Void[/magic]. This will be its first foil printing so make sure to scoop them up as they are as good as gold!

[magic]Infectious Horror[/magic] this will be its third printing and for the mana cost there are better cards for the slot. It won’t be going into the binder.

[magic]Liliana’s Specter[/magic] is a fun card. I have seen it in plenty of EDH decks. Since it is a third print run of it I don’t see this thing being a chase card unless you find a foil as they make good trade fodder.

[magic]Magus of the Mirror[/magic] will see its second printing in Conspiracy. This card is really doesn’t see much EDH play. I won’t be chasing it.

[magic]Morkrut Banshee[/magic] a second print run and has very limited EDH appeal to me. I can see it finding a home in a control deck but I know there are better cards for the slot. From a cost conscious player it could be a good fit.

[magic]Necromantic Thirst[/magic] saw its first printing in Ravnica. This also has very limited EDH appeal. There are cards that do the same thing but don’t have to be attached to a creature (basically turning that creature into a lightning rod). Although I can see attaching this enchant to [magic]Kokusho, the Evening Star[/magic] making people not want to hit it.

[magic]Phage the Untouchable[/magic], want a fun way to lose the game?!? Play Phage! Something always go South when she’s in a deck.

[magic]Plagued Rusalka[/magic] I can see this has some potential, it just needs the right general… maybe a [magic]Ghave, Guru of Spores[/magic] deck.

[magic]Quag Vampires[/magic] has some appeal in an infinite mana deck. I can see it fitting nicely in our Grenzo list.

[magic]Reckless Spite[/magic] really only seems good to me in a [magic]Oloro, Ageless Ascetic[/magic] deck… which is why it came in the pre con. 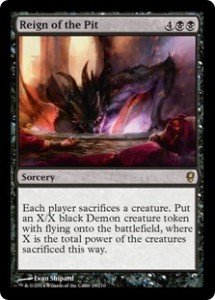 [magic]Reign of the Pit[/magic] I like this card a lot. Its fair (everyone sacrifices if possible) and I end up with a huge creature!… yes, very fair 🙂 make sure to pick these up as it has EDH potential written all over it.

[magic]Skeletal Scrying[/magic] I can see this card having potential. It looks like it could fit into a Marchesa deck. See our primer for her to understand more.

[magic]Smallpox[/magic] is back and rocking the M12 look. This is a good card as I have used it in a Nath deck. I wouldn’t chase them now as this is its third printing but if you don’t already have one, get one.

[magic]Stronghold Discipline[/magic] has been reprinted and really only fit into metas that play a lot of infinite creatures.

[magic]Syphon Soul[/magic] has also been reprinted. This card is ok… but there are far better cards for the slot.

[magic]Tragic Slip[/magic] has some EDH potential as it can deal with indestructible creatures. I personally wouldn’t play it but that doesn’t mean you shouldn’t.

[magic]Twisted Abomination[/magic] nothing really insane about this creature. I like the regenerate ability and swamp cycle but there are far better creatures for the cmc.

[magic]Typhoid Rats[/magic] I was in a play once that was about rats… thats about all I can say about this card. 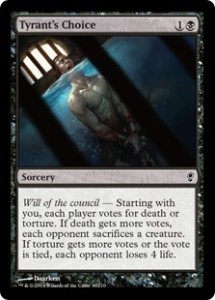 [magic]Tyrant’s Choice[/magic] I like this card, it has potential. For the drop it has a solid removal factor but 4 damage isn’t a ton in EDH esp with so many life gain options out there. I will be looking for these… but not chasing them.

[magic]Unhallowed Pact[/magic] a fun card and this will be its second printing. Can be fun in a more casual deck that uses a good amount of removal.

[magic]Vampire Hexmage[/magic] this is a great card, so much utility in EDH. I love pairing this with [magic]Dark Depths[/magic] to just make an insane monster. 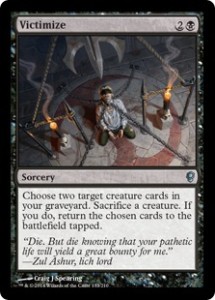 [magic]Victimize[/magic] has been reprinted for the first time and the card looks awesome. This is a black EDH staple, so scoop these up especially if you can find them in Foil.

[magic]Wakedancer[/magic] a decent card, I have a friend who plays him in a flicker deck.

Black is all reviewed, but stay tuned to CMDTower because Green is reviewed next!