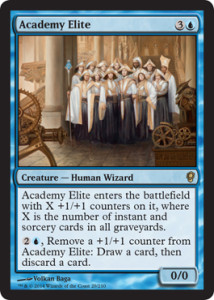 [magic]Academy Elite[/magic] is a new rare from Conspiracy and it seems to have some EDH potential. I can see this deck easily fitting into a [magic]Vorel of the Hull Clade[/magic] deck pretty easily. Not only can it become huge in a Vorel deck but it can also provide some nice card advantage.

[magic]Æther Tradewinds[/magic] saw its first printing in Worldwake and it’s getting a second chance in Conspiracy. This card is pretty good for a 1v1 deck but I don’t see it making it in any of mine. There are just to many better options than this card.

[magic]Air Servant[/magic] is great in limited but wont hold much water in EDH. 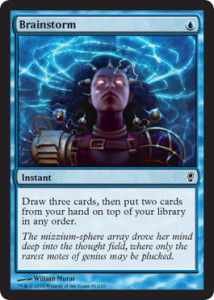 [magic]Brainstorm[/magic], this card I’m truly excited about. Really I’m excited for the opportunity to open a foil version of it as they are currently outrageously expensive. If you can find someone willing to give them up, take them and never look back.

[magic]Breakthrough[/magic] got some new card art for Conspiracy and it looks great. I love this card in the right situation. This card has does see EDH play in certain decks so grab the foils when you see them. [magic]The Mimeoplasm[/magic] loves this card.

[magic]Compulsive Research[/magic] is just awesome. Grab them in foil and you wont be sorry.

[magic]Crookclaw Transmuter[/magic] has some potential in a 1v1 deck but not in any of mine. I wont be putting this into any of my binders.

[magic]Dream Fracture[/magic] sees some play in group hug decks but those really aren’t for me. Not worth chasing.

[magic]Enclave Elite[/magic] saw its first printing in Worldwake and can be played in some decks but usually they are large mana generating decks or Vorel decks. Think about picking them up if you play those style of decks.

[magic]Fact or Fiction[/magic] has seen another printing and it’s no suprise, this card is good. I will not be chasing this card but i’m glad to see it come back.

[magic]Favorable Winds[/magic] is an anthem for flyers and does see some EDH play, it’s worth taking a look into.

[magic]Grixis Illusionist[/magic], originally printed in Conflux I’m sure will do well for mana fixing … but wont do well in any EDH deck. This card would be awesome if it didn’t only target a land I control.

[magic]Jetting Glasskite[/magic] good in an enchantment deck but I cannot remember ever seeing this card in EDH. It will not make it into the binder. 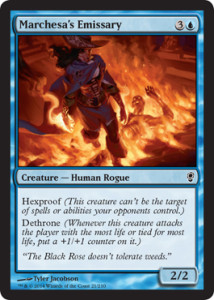 [magic]Marchesa’s Emissary[/magic]a new card from Conspiracy, this card  looks like it could see some EDH play in a 1v1 deck, but I wont be chasing it.

[magic]Marchesa’s Infiltrator[/magic] is another new card from Conspiracy, I can see this fitting into a few EDH decks. I would say if you are going to go after it… go after the foils although it probably wont be worth much down the road. 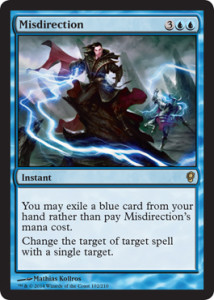 [magic]Misdirection[/magic]… I love and hate this card. I have lost a few awesome EDH games because of it. Collect as many of these as you can it’s a powerhouse. 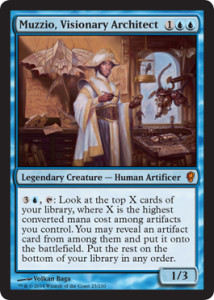 [magic]Muzzio, Visionary Architect[/magic] . I know what you all are thinking… this guy is a horrible EDH general and you would be right but if you think he is a terrible card, you would be wrong. This guy can play nicely in an artifact deck. He may not be the General but he is a solid Soldier. 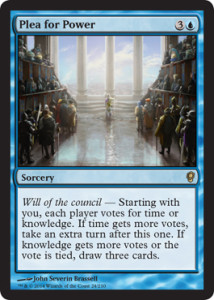 [magic]Plea for Power[/magic] is a new card from Conspiracy and this is definitely EDH playable. I would imagine most of the time you will get three cards but three cards for four mana is still an awesome deal.

[magic]Reckless Scholar[/magic] has some viability in EDH I mainly see it in graveyard based decks. There are probably better picks for the spot tho.

[magic]Shoreline Ranger[/magic] glad to see cycling back but this card isn’t worth it. There are sooo many better cards for the slot. 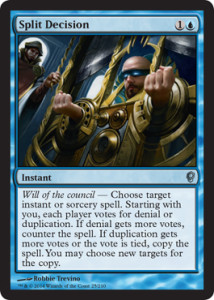 [magic]Split Decision[/magic] this card is awesome and is definitely EDH playable. Pick these up foil or not, they are going to be awesome. The table will make the right decision… I hope.

[magic]Stasis Cell[/magic] is playable but I just don’t see it. I wont be chasing it. 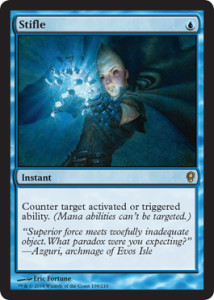 [magic]Stifle[/magic] has been reprinted and it looks awesome (judge promo art)! Snatch these up when you can foil or not this card is awesome and valuable.

[magic]Traveler’s Cloak[/magic]. I like this card for one reason, Rebecca Guay painted it. She is talented and has such a nice style. To see all the art she has done, click here.

[magic]Turn the Tide[/magic] … I guess you can write on it as a proxy. That’s about all the EDH play this card will see.

[magic]Wind Dancer[/magic] has seen a few printings but it still wont see the inside of any of my EDH decks.

Blue is all reviewed, but stay tuned to CMDTower because Black is reviewed next!