[magic]Charging Rhino[/magic] will see its third printing in Conspiracy and is still rocking its original art from Tempest. This card doesn’t do much for me and doesn’t seem very viable for EDH… it MIGHT fit into a [magic]Xenagos, God of Revels[/magic] but that is about it.

[magic]Copperhorn Scout[/magic] is an awesome card for Elf decks, great for utility. (I also love this card in my Pauper Elf deck).

[magic]Echoing Courage[/magic] has potential, It seems like it would fit really well into a token deck. Squirrel’s love this card. 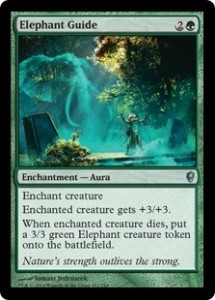 [magic]Elephant Guide[/magic] got a makeover in Conspiracy with this awesome art. I like this card a lot and it has potential in the right decks. I like to pair it with the enchantresses and go to town.

[magic]Elvish Aberration[/magic] another card for the elf army, this has EDH potential in a tribal deck. 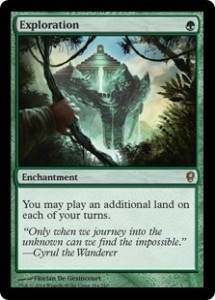 [magic]Exploration[/magic]… Wizards, thank you. This card is a green EDH staple and you reprinted it with incredible art. Thank you. Grab these in foil and non-foil as they are forever playable in EDH.

[magic]Gamekeeper[/magic] this card is a lot of fun in EDH it really makes me think about the Forest Gump quote “Life is like a box of chocolates, you never know what you are going to get”. Great card to get in foil if you can as it still holds value even though this is its second printing in foil.

[magic]Gnarlid Pack[/magic] I see this card fitting into decks that produce infinite mana. Cards like this find their sweet spot in decks like that. 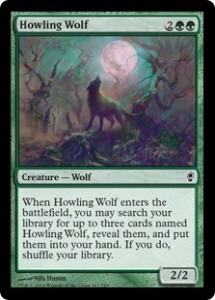 [magic]Howling Wolf[/magic] got a great new look, but unfortunately this card really isn’t EDH playable… well it can shuffle your library. SO it could pair with [magic]Sensei’s Divining Top[/magic].

[magic]Hunger of the Howlpack[/magic] has some value in a very narrow play style. I have seen people use this card in [magic]Experiment Kraj[/magic] decks… but its not for me.

[magic]Lead the Stampede[/magic] I miss this card so much, it was so much fun in the Repeat Performance deck that was put out last year. Unfortunately it doesn’t have much value in EDH. It would be better if they put the cards into your graveyard instead of the bottom of your library. 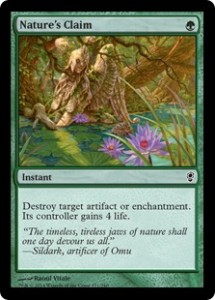 [magic]Nature’s Claim[/magic] is seeing its second printing in Conspiracy and it got a facelift. This card is great for 1v1 style EDH decks and can provide some awesome removal at a great price. Make sure to scoop these foils up!

[magic]Pelakka Wurm[/magic] is back and this card has a lot of bang for the buck (and I’m not talking cmc). For such an inexpensive card to do so much he fits beautifully into any flicker deck.

[magic]Plummet[/magic] is to situational for EDH. It’s nice if your meta includes generals like [magic]Kaalia of the Vast[/magic]. 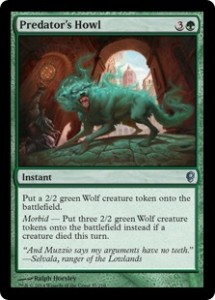 [magic]Predator’s Howl[/magic] is a new card from Conspiracy that brings back an old mechanic. I can see this fitting beautifully into a [magic]Ghave, Guru of Spores[/magic] deck. Three 2/2 for 4 mana at instant speed? Done! 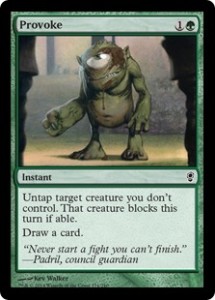 [magic]Provoke[/magic] an old card with a new face in Conspiracy. This card looks like it would fit into a 1v1 deck no problem, and it provides card draw!

[magic]Realm Seekers[/magic] is a new card from Conspiracy and looks awesome. It can easily fit into a [magic]Vorel of the Hull Clade[/magic] or [magic]Omnath, Locus of Mana[/magic] deck! The ability to search for lands like this is nothing new, [magic]Fertilid[/magic] also has this ability but it can also target your opponents.

[magic]Relic Crush[/magic] originally printed in Zendikar and in my opinion should of stayed in that set. There are just to many cards that do similar things at a better CMC. I won’t be adding this to my binder.

[magic]Respite[/magic] first released in Tempest is a pretty tempting card when paired with the right general. I have used this card in the past in my [magic]Angus Mackenzie[/magic] deck.

[magic]Sakura-Tribe Elder[/magic] an EDH staple in green. This card does work. If you don’t already have one in your EDH binder now is your time to get one!

[magic]Scaled Wurm[/magic] has seen a couple of printings and I see its value for a pauper deck but not a EDH deck. 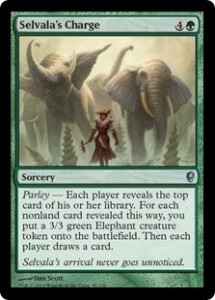 [magic]Seval’s Charge[/magic] a new card from Conspiracy that offers plenty of potential for EDH fun. This card seems like it can find a home in a few different EDH decks. 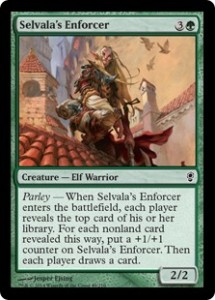 [magic]Sevala’s Enforcer[/magic] is another Parley card from Conspiracy and I really do enjoy this mechanic as this guy gets bigger people still get cards so they wont want to kill it. This guy would fit beautifully into an Elf tribal deck as well. This guy is going to be good so pick them up (especially if you can find them in foil). A possible 6/6 for four mana not bad at all!

[magic]Sporecap Spider[/magic] another card for the [magic]Doran, the Siege Tower[/magic] decks out there. This guy would fit nicely into that deck as it then just becomes deadly. 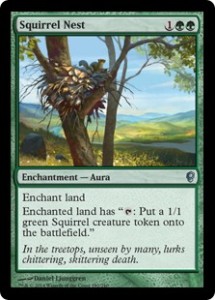 [magic]Squirrel Nest[/magic] when I first saw this spoiled I was soooooo happy you have no idea. This card is awesome in EDH and so much fun. This card is pure value get it, collect it and chase the foils (i’m biased when it comes to this card). Also don’t forget to pick up the tokens that go with it as their values have held pretty high through out the years.

[magic]Terastodon[/magic] a true monster in EDH. This guy is a staple and for good reason he puts in work. Because of the number of promos that exist and the fact that it doesn’t see play in any other format this card is a good pickup at a reasonable price. Now there are some sweet new elephant tokens to go with it. 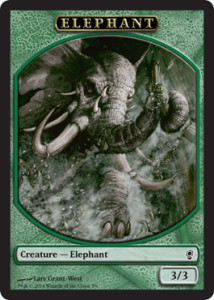 [magic]Wolfbriar Elemental[/magic] is back and boy does he look great. I love kicker cards in infinite mana decks. They just take over the game and the wolf tokens look great too! 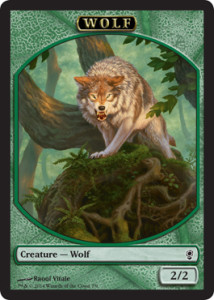 [magic]Wrap in Vigor[/magic] is seeing its second printing in Conspiracy and has some potential in a 1v1 deck but not really in a multiplayer game. 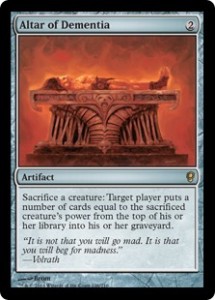 [magic]Altar of Dementia[/magic] is back and it looks great (it still has its original art). This card is incredible in EDH. From combo strategies to mill ones this card is a must have in any EDH binder. Altar, welcome back! 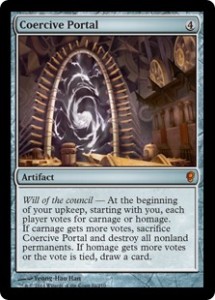 [magic]Coercive Portal[/magic] I like this card but I’m having problems visualizing it being played. Yes, you may be gaining card advantage but as you build your board state it can disappear before your eyes if the vote goes the wrong way. Maybe it could fit into a deck that utilizes the graveyard so you don’t care if your cards end up there.

[magic]Deathrender[/magic] is back and is great when you have a creature in hand … but horrible if you don’t. I like the other swords more for my binder.

[magic]Explorer’s Scope[/magic] is a great card in 1v1 EDH decks and I have played with it in the past. Great for ramping and great for knowing what you are getting next.

[magic]Fireshrieker[/magic] is an awesome card for EDH, this guy is definitely going into my Brago deck.

[magic]Galvanic Juggernaut[/magic] I really not sure why this got back in Conspiracy as I have never known anyone to play it.

Thanks for reading and please leave your comments below (especially if you know how to fit Galvanic Juggernaut into a deck).