All 210 cards from Conspiracy have been spoiled and here at CMDTower, we think it’s time to find the cards that can be added into your EDH collection.

First up! [magic]Ajani’s Sunstriker[/magic]: This 2/2 lifelink cat has been printed once before in M13. He didn’t see much EDH play then and I really don’t see it being playable now.

[magic]Apex Hawks[/magic] originally printed in Worldwake has some EDH potential but not a ton. This card would be awesome in a deck that’s goal is to produce infinite mana (to make this bird HUGE). Past that I really don’t see this card being a solid pickup for the collection.

[magic]Brago’s Representative[/magic] is an interesting card and pairs well with the Conspiracy mechanic, Will of the council. This card will certainly be a limited all star (when built around it) but not an EDH one as it’s very circumstantial. 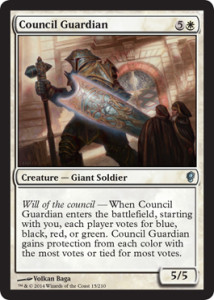 [magic]Council Guardian[/magic] has some EDH potential, I see it fitting into a Political Puppets style deck. With its Will of the council mechanic this card can put in work if you have friends at the table. I don’t think I will be adding this to my personal collection but I’m sure this card could fit into someone else’s. 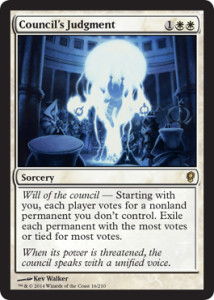 [magic]Council’s Judgement[/magic], is an awesome EDH card. This card is my favorite type of removal in EDH, exile. The fact that this card has absolutely no downside for you in the end is a great reason to pick it up. Sure it’s Sorcery speed, but on the off chance that everybody chooses a different target, you get to exile four non-land permanents for only three mana. This will definitely be going into my EDH collection and I hope you pick some up too.

[magic]Courier Hawk[/magic] is seeing its second printing in Conspiracy but it wont be seeing any of my EDH binders. 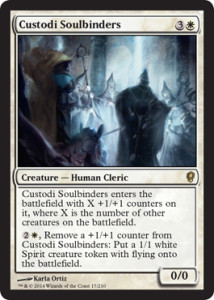 [magic]Custodi Soulbinders[/magic] looks like it can be a powerful card when put into the right deck. I see this card playing well in a token deck or in decks that utilize [magic]Skullclamp[/magic] as a draw mechanic. A worthwhile pickup for anyone looking to play tokens and creature heavy builds. 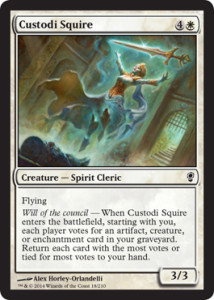 [magic]Custodi Squire[/magic] has an interesting mechanic. I prefer [magic]Replenish[/magic] and other cards that target my graveyard but if you want to make some friends this is the card for your EDH deck.

[magic]Doomed Traveler[/magic] was just an awesome card when it was standard legal but I just don’t have space for it in my EDH decks.

[magic]Glimmerpoint Stag[/magic] saw its first printing in the Scars block and sees a good deal of play in EDH decks. This is a solid pickup and a powerful card in the right EDH deck.

[magic]Guardian Zendikon[/magic] is a fun card that made its debut in Worldwake. This card, and cards like it haven’t made it any of my EDH decks but I imagine they could fit into a [magic]Doran, the Siege Tower[/magic] deck.

[magic]Intangible Virtue[/magic] has been an anthem that has been placed in many EDH decks and will for many years to come.

[magic]Kor Chant[/magic] got a face-lift with some new art, a great improvement on its original Exodus printing. I like this card, but it is very circumstantial.

[magic]Moment of Heroism[/magic] is just not powerful enough for EDH. It’s not going into my binders.

[magic]Noble Templar[/magic], originally printed in Scourge just doesn’t give enough bang for its mana cost. I like the fact that it has Plainscycling but I would rather use that spot for something better.

[magic]Pride Guardian[/magic], originally printed in M12 has great artwork but that is about it. This card just isn’t good enough for EDH.

[magic]Pristine Angel[/magic] is a great card for certain decks. This card offers great protection when needed and damage when the moment is right. This is definitely going into the binder.

[magic]Reya Dawnbringer[/magic] is a lightning rod and for good reason. This card can put in work if not stopped fast enough. A near mint copy is always a welcome addition to my EDH binders.

[magic]Rousing of Souls[/magic] is a new card and it seems like it has some potential, it creates creatures and has a draw mechanic (something white doesn’t do often). I think I will go for this card in foil only. 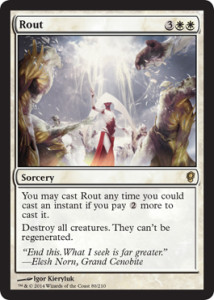 [magic]Rout[/magic] got an amazing makeover in Conspiracy. This card has more than just EDH potential, its simply playable, and with the new art you can bet I will be picking up at-least one copy of this card.

[magic]Soulcatcher[/magic] got a makeover in Conspiracy and I have seen this card in decks before. Good foil pickup.

[magic]Stave Off[/magic] saw its first printing in M12, this card has very limited EDH appeal to me. I can see it being decent in a 1v1 deck but not for multiplayer.

[magic]Swords to Plowshares[/magic] has got another printing in Conspiracy and thank god for that. This card is a white EDH staple and can be useful in most EDH games. Exiling a card is the best way to make sure you wont have to deal with it again.

[magic]Unquestioned Authority[/magic] got some new art and looks great. This card is a solid pickup in foil so keep an eye out.

[magic]Valor Made Real[/magic] was reprinted in Conspiracy and I really don’t have much to say about it. I’m not going to be putting it in my binder.

[magic]Vow of Duty[/magic] was heavily printed with the release of the first commander sets and it was usually the first card I took out of the preconstructed decks.

[magic]Wakestone Gargoyle[/magic] was originally printed as a rare and has been downgraded to an uncommon. This card has a place maybe in a defender deck but it’s not for me.

White is all reviewed, but stay tuned to CMDTower because Blue is reviewed next!