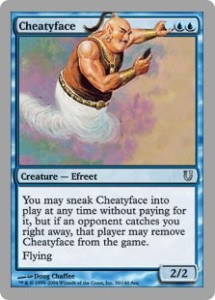 Cheating in Magic is a subject matter that is never an easy to discuss as there are many different opinions on the subject. Some people think its as bad as punching a baby. Some view it as the opposing players fault for not catching the act. Some people will even become intrigued by how it happened and want to learn more, I call this being tempted by the Devil. Some people (the cheaters) believe that it is ok as long as they win.

The reason I’m writing this article is because at a recent tournament I was cheated and didn’t even realize it until after the round when a friend of mine pointed out that my opponent cheated. Because of this fact and my recent post on twitter where people wanted to learn more I’m going to explain some of the various forms of cheating and how you can prevent them.

Before I begin I just want to stress one thing… don’t cheat. Magic is a game with multiple variables, except them and play the game fairly.

The Double Nickel(This was the method to cheat me out of a fair match and is one of the easier ones to catch.)

Step 1: Take your deck and put all your lands into one pile and all your other cards into another.

Step 2: Take the land pile and put it on top of your other cards.

Step 4: Take all the piles and place each one on top of the other.

The way the scam works is two fold. One is to trick your opponent into believing you have shuffled your cards into random piles and two, hope your opponent just single cuts the deck.

The goal of the Double Nickel is to evenly split up your lands so you don’t get flooded. Basically this method ensures you will get a land every 2-3 cards.

Really, there are two schools of thought.

1. You can thoroughly shuffle your opponents deck ensuring a true variance in the cards so the consistency of their deck changes.

2. When the opponent presents the deck, pick it up and call a Judge to do a deck check (this is the method I’m going to use going forward, I just don’t want to play with someone who cheaters).

Step 1: Crack a fetch land or play a tutor.

Step 2:  When searching your library place your most desired cards on the bottom of your library.

Step 3: Shuffle your library while keeping your cards you want at the bottom (typically doing the over hand method).

The scam makes the opponent believe that the deck was evenly shuffled and that you were only looking for the card you fetched or tutored for.

The goal  here is that the opponent will only single cut the deck. What this will do is move the desired cards closer to the top of library thus increasing the odds you will get them.

There are two sound methods I recommend for preventing this. One, always cut a different way. What this will do is confuse the cheater so they will never know where to place the cards they want. Two, after the cheater presents their deck thoroughly shuffle their libraries 3 to 4 times. Unfortunately this isn’t something you could call a Judge on as it is almost impossible to prove they did this.

Step 1: When you draw your first hand (assuming its a bad draw).

Step 2: Take the most desired card and place it in the back of the hand.

Step 3: “drop” your cards on the floor the most desired card will most likely stay on top of the cards.

Step 4: Palm the card and slip it under your leg.

Step 5: Pickup the rest of the cards and place them in a single stacked pile and declare that you are going to draw a new hand.

Step 7: When you need the card under your leg sneak it back into your hand.

The scam here is that the opponent will not notice one card missing from the deck.

The goal is to hide an answer or good card until it is needed.

If you believe your opponent has palmed a card simply count their library. Most likely the cheater will slip the card back on the floor and say they “missed” that one once you realize they have cheated you. If you know the player has done this, call a Judge over and have them do the count.

Step 2: After game one grab and eat a few.

Step 3: When side boarding wipe your finger on the side of the cards so they leave a small impression.

Step 4: Shuffle your deck and present it to the other player.

Step 5: After your opponent cuts the deck, recut it with the marked cards closer to the top.

The scam here is that most people will ignore the fact the cheating player is eating a snack (really we all get hungry during tournaments) and won’t notice a few crumbs sitting on a card.

Call a Judge. If there is a theme between the marked cards then the Judge should easily spot it.

This same method can be applied to bending or crimping the corners of the sleeves so the offender can feel the needed cards when cutting.

Sleight of Hand (typically seen in drafting or sealed)

Step 1: After building your deck look to see if your opponents are sleeving their cards.

Step 2: If your opponents are not sleeving their cards don’t sleeve yours.

Step 3: When paired up with an opponent that doesn’t sleeve their cards you exile one of their more valuable cards.

Step 4: At the end of the round slide the exiled card under your card.

Many people won’t notice one card missing from their deck until after the tournament when they putting things away into binders and such.

The goal of this is to get high value cards.

Sleeve your decks, be aware of the board state and check your deck in between rounds. Now if you catch someone stealing I recommend getting the tournament organizers involved as it is never a good idea to confront someone who just stole something from you. I would assume a thief would say it was a mistake but you never know how someone will react.

Step 1: Prior to a tournament work with a friend to create some signals.

Step 2: Have your friend show up to a tournament just to “watch”.

Step 3: During your matches have your tournament have your friend check your hand (standing behind you) and circle to the other side of the table (train tracks) to see your opponent’s hand.

Step 4: Your friend will signal what can come into play.

This works on the principle that the opponent will not notice they are being scouted.

Give the cheater an unfair advantage in a tournament.

Typically in tournaments people will be all over the place so spotting teams who are working together can be very difficult, so the best strategy here is to just keep your hand placed down when you are not in need of them. Think WSOP and how the players keep their cards out of their hand. The harder it is for a person to see your hand (no matter what side of the table they are on) the better it will be for you.

Step 1: Put some dust or powder onto a cloth.

Step 2: Locate a player who is wearing a jacket and has their binder out.

Step 3: Walk up behind them and brush their shoulder off with the cloth (pretending to be cleaning it).

Step 4: When the person turns to you inform them that they have something on their jacket.

Step 5: Since the person will remove their jacket and start brushing it off their back will be to their binder. Have your friend come up and take their binder and walk off.

Step 6: Walk off in the opposite direction as your friend after helping the person clean their jacket (to avoid suspicion).

The scam works off of building a false friendly encounter and using misdirection to succeed.

Be aware of your surroundings and do not lose track of your collection. If you do discover that your stuff has been stolen talk to the organizers as there may be cameras in place.

Step 1: Wait for your opponent to pass the turn while fetching (this is typically done because the other player will not make anymore plays that turn and doesn’t want to delay your play).

Step 2: While your opponent is searching for their card pinch the top two cards of your library and slide them into your hand (this keeps the cards from separating)

Step 3: Keep the two cards stacked in your hand.

The scam works off the opponent not paying attention to what is going on in the game.

Never ever pass the turn before completing all actions your cards require. If you are going to fetch, then fetch shuffle and present. THEN pass the turn. This way your attention is always on the game. If it early in the game ask your opponent for a card count of cards in hand. If the math doesn’t add up for what has been played then call a Judge.

I wanted to say in closing that I didn’t write this article to teach people how to cheat but to help identify ways people do cheat. After being the victim of cheating I understand what it feels like to be shorted and I hope that this article helps other players before it happens to them.