Nobody likes having their lands destroyed. Whether by your own means or at the hand of the enemy, losing your lands can cause a dramatic change in how you play the rest of the game and often leads to a devastating loss. It sets you back, and is often compared in the early game to a Time Walk, essentially allowing your opponent(s) to forget that your last turn ever happened. Blowing up someone’s lands is often viewed as one of the most degenerate moves in the game and often makes you a target. But when you’re on the receiving end of a land destruction spell, and you’d like to be able to retaliate, it can often be difficult due to a lack of mana. You can’t cast those spells to get back at your opponent without the mana to cast them, and that’s a problem. For the longest time, when your lands were destroyed, they were gone. You had no way to bring them back, so once that resource was lost, it was forgotten. And then it happened…

On Tuesday, November 18th 2003 an EDH staple was born. After months of deliberation and community interaction, this date marked the end of the second “You Make the Card ” competition, and the card was made public by no other than the man, the myth, the legend, Mark Rosewater. 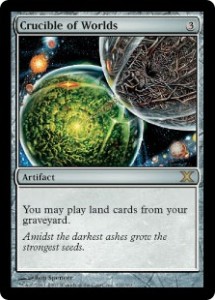 [magic]Crucible of Worlds[/magic] is a (3) cost Artifact with one very unique ability that states:

” You may play land cards from your graveyard.  ”

Since the release of Fifth Dawn this card has just been a powerhouse and can find a home in any EDH deck, as it pairs beautifully with so many different cards. Its uses go far past the idea of simply saving your lands, acting as a critical recycling conduit for a multitude of non-basic lands with significant effects.

[magic]Crucible of Worlds[/magic] when paired with land destruction cards ensures that you can destroy an opponent’s land every turn. This is a powerful play especially if your opponent misses their land drop and can become even more powerful when paired with cards that allow additional land drops per turn like [magic]Exploration[/magic]. When concerning land destruction, it’s impossible and downright rude to forget that much like with creatures, mass removal of lands is also possible. The incorporation of Crucible of Worlds hypothetically changes the text of cards like Armageddon and Devastation from “Destroy all lands” to “Win the game”. 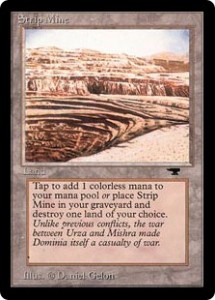 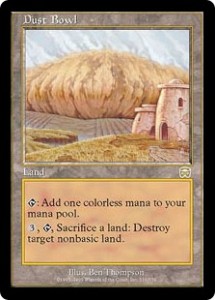 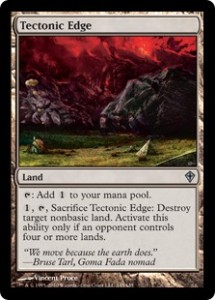 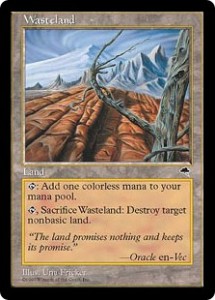 Often times, in order to utilize the additional abilities of a land, it’s required that you sacrifice said land in the process. This is often because the ability to use said ability every turn would be somewhat overpowered, and thus Wizards of the Coast tried to avoid that. With the introduction of Crucible of Worlds, the Magic: the Gathering community told Wizards “No”. The repeated use of cards such as Grove of the Guardian to produce creatures or having access to Dark Depths so you can have that 20/20 Indestructible, Flying monstrosity of a creature at any point you so desire regardless of how many times your opponents exile it is brutal, and with Crucible of Worlds, you have that power at your fingertips. 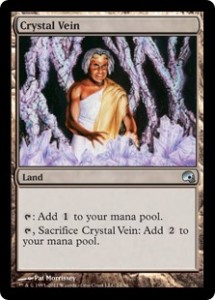 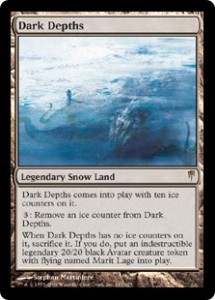 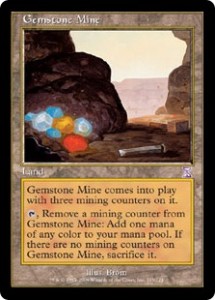 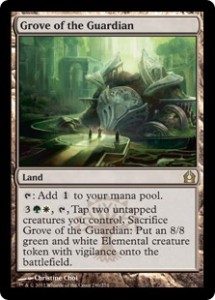 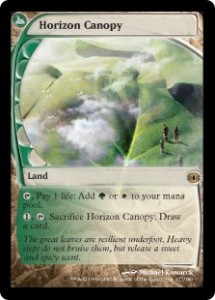 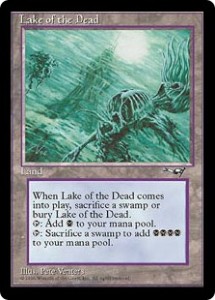 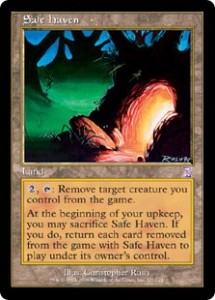 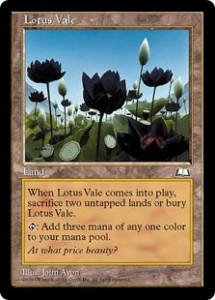 The most common lands that are sacrificed upon their use are the Fetch Lands. There have been multiple incarnations of Fetch Lands, however, we are specifically referring to those from the Onslaught and Zendikar blocks.

Used for multiple reasons such as color fixing, deck thinning, and access to a voluntary shuffle trigger when your draws start to die, Fetch Lands have become immensely popular with the Magic community. Being able to go find the lands you need when you need them to cast that key spell you’ve been sandbagging for the cost of one life and a land seems good. At first, I thought the drawback was too much when I first experienced Fetch Lands as a fledgling Magic player. Who wants to sacrifice their land to get another land? That seems pointless, or so I thought when I was young and naive. The biggest downside of Fetch lands stems from their popularity. As with any Magic card, with popularity comes price. Ranging from anywhere between$50 to $100 and all the way up to $180, good Fetch Lands will set you back a pretty penny.  With fetch lands being so expensive why only use them once? Crucible’s ability allows you to use them again and again so you never miss a land drop.

Since [magic]Crucible of Worlds[/magic] can do so much with so little this card is a lightning rod. Anybody who has played long enough to see it work once knows it’s a threat paired with the right cards and will try to get rid of it one way or another, so we want to protect it as much as possible. A card like Darksteel Forge works wonders in specific decks, but doesn’t fit all builds comfortably. Utilizing cards like Hanna, Ship’s Navigator and Academy Ruins and Buried Ruin is your best bet, with Buried Ruin taking the cake due to its lack of color identity.

Thank you as always for reading and please feel free to leave your feedback below. Make sure to check out our playmat from the tab at the top of the page, and be sure to follow us on Facebook, Twitter, and Tumblr.