The Value of Foil

How does a card go from less than 3 dollars a year ago to over 20 dollars when it has never seen the inside of a top tier deck?

The answer may not shock you (since you are on an EDH oriented blog), it’s Commander. 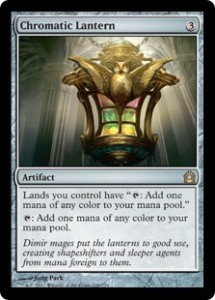 [magic]Chromatic Lantern[/magic] is a 3 drop mana rock that allows all your lands to produce one mana of any color and who’s foil prices have risen well over 20 dollars in just under a year.

Since Chromatic Lantern’s release this card has become an EDH staple and because many EDH players like to pimp out their decks the foil versions have seen tremendous success.

So how can you tell what the next foil Chromatic Lantern will be?

Hopefully by evaluating the answers to these simple questions will you have your answer:

1. How many times has the card been printed?

2. Is there a card that does the same thing but for less mana?

3. What is the color identity of the card?

Using these three questions and the before mentioned card can we see why this card is so valuable.

1. Chromatic Lantern has been printed in only one set. The more times a card is printed the less valuable the card becomes. A great example of this would be [magic]Jace, The Mind Sculptor[/magic]. Once this card was reprinted in From the Vaults 20 the card’s value dropped a great deal.

2. There are cards that produce 1 mana of any color at three mana but none that allow all your lands to produce mana of any color. If there is a better option most likely players will go for that, unless the card is just to outrageously priced or is banned in the format.

So what’s the next Chromatic Lantern?

It’s tuff to tell but one card that I am looking at is [magic]Victimize[/magic].

Using the questions above I’ll explain.

1. Victimize saw its first printing in Urza’s Saga and was just printed with new art in Conspiracy and the Conspiracy version can be found in foil! 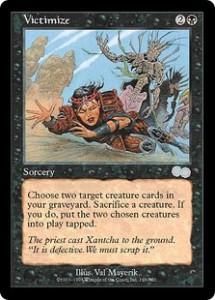 2. This card has a unique ability to bring back two cards from the graveyard for the cost of one. With the new legendary [magic]Marchesa, the Black Rose[/magic] you could potentially get back three cards (this includes the card that was sacrificed).

3. The card’s color identity is black which is one of the most popular and powerful color identities in Commander. Also it’s important to note that Victimize is already an EDH staple for black.

Right now a foil Victimize is averaging 5 dollars, but I see this card going much higher as the popularity for Commander increases so it’s a pretty solid bet.

As time goes on I’ll revisit this article and make new suggestions on other cards so please follow us on twitter and please, leave your comments below for what you think the next Chromatic Lantern will be!